Higher by DJ Khaled featured the beloved Nipsey Hussle, John Legend, finally here. I’m so sorry I have been missing out for a few days, since everything just so packed up, and I just not feeling right.

As you probably know that this is going to be Nipsey Hussle’s last music ever, and this the best ever for the fans. RIP Nipsey Hussle, and seems like God loves you even more, so that’s why he choose you to be His next angel. Keep hustling, and slaying in heaven.

and yess, seems like just go Higher, and Higher, keep looking for us Nipsey! We love you, and you always be missed as always. And just to let everyone knows that the devil is always be everywhere, and anywhere, but keep close to your loved ones.

I have to say I was so touched by the song, and it is one of the best posthumous released by an artists. It was so sad that Nipsey can’t be there physically when the song is dropped, but he probably rapping, and making the whole heaven to something super amazing. There you go you can see the lyrics, and more meaningful lyrics on Genius.com 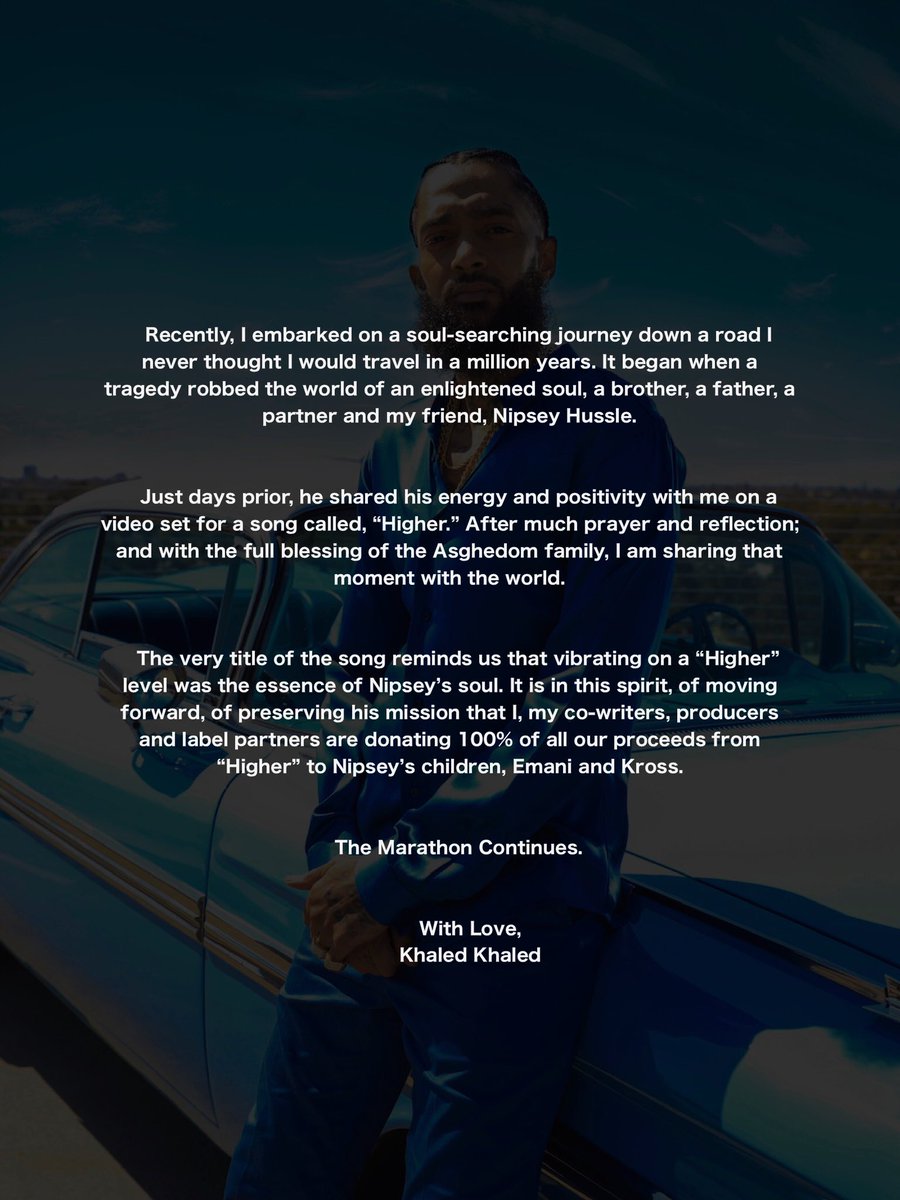 [Chorus: John Legend]
Oh, you keep taking me higher and higher (Yeah)
But don’t you know that the devil is a liar? (Yeah, I know)
They’d rather see me down, put my soul in the fire
But we keep goin’ higher, higher

[Verse 1: Nipsey Hussle]
Look, look
My granny 88, she had my uncle and then
A miscarriage back-to-back every year for like ten
Pregnant with my moms, doctor told her it was slim
Was bed rode for nine months, but gave birth in the end
Pops turned 60, he proud what we done
In one generation, he came from Africa young
He said he met my moms at the Century Club
Los Angeles love kinda of like Hussle and Boog
Mani turned ten, Kross turned two
Startin’ to see this life shit from a bird’s view
We the ones that made millions off the curb, fool
In this rap shit ten, never made nerd moves

[Chorus: John Legend]
Oh, you keep taking me higher and higher (Yeah)
(Hussle, Khaled)
But don’t you know that the devil is a liar? (Yeah, I know)
(Right back)
They’d rather see me down, put my soul in the fire
But we keep goin’ higher, higher (Woah, woah)
(Nip, talk to ’em)

[Verse 2: Nipsey Hussle & John Legend]
Emptied out the clip, it was broad day
Fuck niggas always gotta learn the hard way
We gon’ tape it off if we ball play
Put a half a moon crescent on your bald fade
Police hit the lights, that’s a car chase
Lookin’ back at my life make my heart race
Dance with the devil and test our faith
I was thinkin’ chess moves but it was God’s grace
Crooked ass whoever ’til we all straight
With no shame, I peeped game and it’s all fake
South Central state of mind, high crime rate (Yeah)
Homicide, hate, gang banging’ll get you all day (Yeah, yeah)
And look at my fate[Chorus: John Legend & Nipsey Hussle]
Oh, you keep taking me higher and higher (Yeah)
(Told Khaled bounce the four ’til the bar break)
But don’t you know that the devil is a liar? (I know)
They’d rather see me down, put my soul in the fire
But we keep goin’ higher, higher[Outro: John Legend]
Higher
Oh, Lord
Can you feel it?
My shoes are scrapin’ the sky
I’m so high
We keep goin’ higher