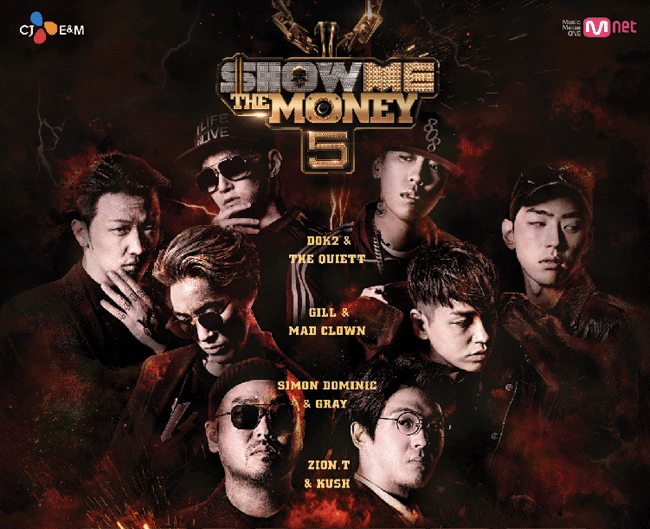 hii guys it seems that I updated bunch of SMTM 7 stuffs right? But to be honest the most exciting season for me was season 5, although you guys might argue with me why it isn’t the 4th or 3rd or even 6th and 7th, simply because the participants. Season 4 seems a bit fishy with the voting, because if you look at the other competitions, the participant who are more famous to the public actually won the competition, season 3 I wasn’t really a fan because they don’t really make the song, like YGGR, the original version featured the other ILLIONARE members, I think at some point Show Me the Money really make a new songs for the participants in season 4 in order to keep up the expectation.

I was particularly excited for season 6, but it wasn’t exciting as I thought, with season 5 Bewhy able to excite the fans, and definitely the line of the judges like Kush who made I Don’t Care and Zion T, also GRAY and Simon Dominic actually help the fans are exciting with the show, other than that the special performance from YG Ent is just amazing, who knew that they even made new songs for the producer stage!

After listening to the songs, Machine Gun, and Knock is definitely my favourite on the opening of the show. Like with Knock, Zion T shows how he is capable of being the most sought after R&B singer in South Korea, while Machine Gun reveals the other image of Zion. T, as well as Kush. Although Kush is sadly not in YG anymore, but my support and love will always be with him! Bewhy’s Forever is also such a legendary song to the series itself, after the legendary stage of Fear by MINO.

Also who knew that the AOMG team would go that far, after such a turbulence during the team pick up, and ONE who went through the SEMIS is just such a drama! I think the judges’ relationships with each other was so funny, especially the AOMG team, because they were F*cked but they won the competition!  I think comfortable got PAK on the charts, its a chill hip hop song, so I would like to suggest you guys to listening to this songs.

MAD CLOWN and GIL’s team #GUN aka Song Minho’s cousin also made it to the semis with the collaboration with GUMMY (here my YG family fangirl just went on), the song is about your family, where I could say its so touching, its a bit different from his song with Jessi, but otherwise the songs are great..I can’t wait for season 8 though!