About 2 years ago, when I first became a fan of G Dragon, I saw this guy..Gabriel-Kane Day Lewis having fun with the k pop king himself at one of the fashion show. Gabriel is the son of actor Daniel Day Lewis, and actress Isabelle Adjani..long story short.. I personally think that Gabriel Kane himself is such a cool guy..you know when there’s a combination between swag, and dandy..you’ll get Gabriel Kane 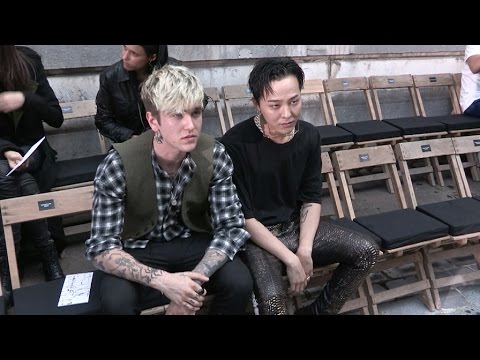 I knew that in 2016-ish Grabriel Kane released a song called Ink In My Vein, which he released a music video for it. Just in case you guys are also interested with his other songs, I put on his soundcloud account to, so it will be easier for you guys 🙂 so from here now on I write about what do I think about Gabriel Kane..Firstly appearance wise, most of us will think that he will has this rock-vibes, but apparently he is not ! So if you want to check out what he sounds like there are elements of pop, rock, a bit R&B vibes, where I think its very in right now. It is understandable that the path of going to the musical business is definitely hard, but I personally think he is so talented, and I think he needs to update the music thing. It’s been two years, and he hasn’t update what his current music sounds like, and I do miss the voice from his music.

Music video artistic wise…I like his music video because OMGGG its important to have such a good looking face, I mean I also like the visuals of the inks on the video..and most importantly when he stated that he wants to branched out from his father’s career. In fact I think its his right choice, considering its hard when you have parents with such a successful career, people might expect us, to be at least the same, behaving the same..but apparently its not. Anyways…please check it out for his music for more….