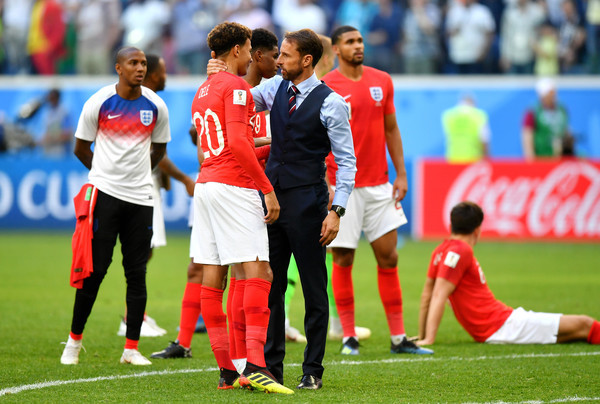 Soo England will face USA, and Croatia next November and I’ll be home, so hopefully I will be able to watch the game through TV, or online thing because back in Indonesia they have an online platform to watch the show. I definitely very excited because their ranking is also one up, soo it must be one of their happiest moment right now. I definitely loving the whole team, management, because if I saw the photos it looks like Gareth Southgate really treating the players like his sons, I mean most of the team now are in my age 20s, and Jadon Sancho is younger than me, and my brother.

I definitely really liking it because that’s the most important thing, changing the mentality that actually they are being loved. To be honest the media sometimes are the giants in their life, probably its like when someone talking shit about us for example not being talented or whatever. To me England its not a bad team, in the previous generation players like John Terry known for his strength, Steven Gerrard known for the midfield, he was convinced by Jose to join him in Chelsea, Inter Millan, and Real Madrid but preferred his home town’s club Liverpool, even Frank Lampard also known for his fluidity. They have Wayne Rooney that’s one of the best players in the world, but they don’t really win a big competition. They have the best team still, like RAHEEM, DELE, STONES, DIER, DELE, RASHFORD and more and to me ENGLAND IS THE BEST TEAM

Firstly most players are playing in the Barclays Premier League, which they basically saw each other every week. What about the other players ? players like from Croatia, Portugal, Belgium are playing in the Premier League which basically they know what the England players style of play (I think). Sooo talents like Jadon Sancho for Dortmund, Marcus McGuane for Barcelona B its a good chance because they are playing with non English players which help them to adapt with the other players tactic ❤ ❤ FINALLY FOOTBALL ALMOST COMING HOMEEEEEE I think its a good chance because currently England are being loved by the fans, they are improving, and use a lot of young players. THE GAFFER is also super loveable 🙂

As usual because its a music blog other than a fan girling blog, here are the songs for you guysss 🙂 I was hoping that FA Cup 2012 was sang by the players like Steven Gerrard, and actually Daniel Sturridge is able to nailed it, but too sad it was not happened. Anyways enjoy the music that linked down, and definitely support the artists 🙂 let me know what’s your favourite sport and athletes too 🙂 love you guys

Actually I really love a show like BBC 1 XTRA, and having freestyle with football theme or any theme is actually fun because we build a story between those few words, and build up a story, and I think its fun because we need to think about the wordplay and more. I mean to be fair even back at my home country the people are very fascinating to put rap songs online, I mean rapping its not easy as what people think…but yeah I mean I don’t have the swag to rap to be fair..