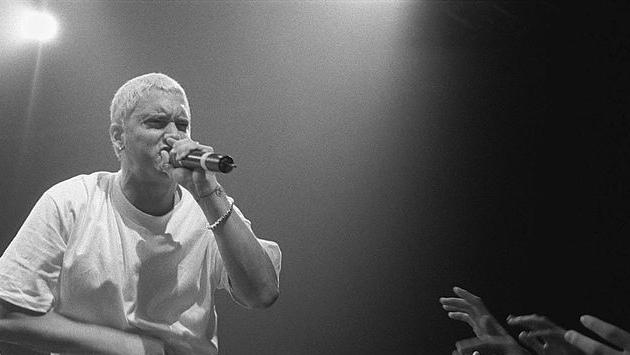 So Eminem just cameback with unexpected album to date, people are just feeling that Revival album was didn’t sound like Eminem, or being to poppy. The thing with the society they always complaining on what they have, and never feel grateful. Firstly its like when Eminem going hard like Rap God, or Slim Shady people will say “OMG how can you listen to the songs, its too fast”, and now he got songs from Revival like River, people said “OMG its too poppy and its not Eminem”. To me I don’t think that album is bad, its part of reconciliation of Eminem, to himself, his family, and some are just his expression, people are fee to experimented with their own art. And now apparently someone replied to the dissed, and its non other than MGK.

And remember on how rappers are not coming to dissing back Eminem ? Well apparently Eminem dissed MGK on the track Not Alike from the album Kamikaze. The line where Eminem said “But next time you don’t gotta use Tech N9ne. If you wanna come at me with a sub-machine gun. And I’m talkin’ to you, but you already know who the f*** you are, Kelly. I don’t use sublims and sure as f*** don’t sneak-diss But keep commentin’ on my daughter Hailie.

And MGK just released a dissing track called Rap Devil hitting on Eminem. But to me if I’m a father and I saw that kind of tweet I feel like I’m going to explode as well, besides without Eminem also said that his album didn’t do well, so you don’t need a diss track where you call its boring Okay, how do I say this? (fack, fack, fack) Last year didn’t work out so well for me (fack, fack, fack) (fack last year) 2018, well (fack, fack) on the lyrics of Kamikaze. That’s why I respect Eminem, because he’s not seeing from one side point of view of himself, in fact you can find like the track Bad Husband where you can see the lyrics, saying that’s he made mistakes in the past.

Clearly you can see the line from MGK “Mad about something I said in 2012 Took you six years and a surprise album just to come with a diss” But you know what its up to Eminem man..its his album and his amazing. I feel like ideas just came around all the time, and the song might not come in 6 years, but its not selected on the previous release..Everything is possible, I mean to be honest even when he said “Still can’t cover up the fact your last four albums is as bad as your selfie” I got it some of Eminem’s album might not be the best out of him, but let’s not forget that name like Camilla Cabello really helped him out for the song Bad Things. And if you want to say that at least you need to have a better sales than Eminem. Let’s not forget that HipHopDX stated that Machine Gun Kelly’s album General Admissions contained some borrowed flow…I mean I don’t hate MGK, but I don’t want to mess with Eminem the king of dissing, and the flow its just amazing, besides before I argue with Eminem to diss him, I feel like he already dissed himself, so I don’t need that 🙂